The Sydney Morning Herald has released an interesting Commerce student Nick Skerritt is looking forward to working in Sydney’s booming finance sector, which will make up 21 per cent of Sydney’s economy in 2026. Photo: Janie Barrett

It’s already the biggest game in town. But by 2026 Sydney’s banking and finance sector will account for one in every five dollars generated by the city’s economy.

Analysis by consultancy SGS Economics and Planning shows finance and insurance already commands a 16.2 per cent share of Sydney’s economic output but that is forecast to swell to 21 per cent in a decade.

Over the past two decades Sydney’s economy has transformed into a knowledge-driven services powerhouse. By 2026 just three dynamic service industries finance, professional services and information media and telecommunications will together make up more than 40 per cent of the city’s economy.

“These are the industries in which Australia is really competitive globally,” says Terry Rawnsley, an economist with SGS Economics and Planning. “They will continue to do well internationally, especially selling their services onto Asia.”

Nick Skerritt is among those aspiring to be part of Sydney’s financial services success story. The 21-year-old is studying commerce and liberal arts at Sydney University and has his sights set on a career in merchant banking.

“It’s an industry that’s always changing and that’s what makes it so attractive,” he says. “Some of the financial services and products that will be on offer in 10 years’ time haven’t even been thought of yet. I’m interesting working in an area that’s so dynamic.” 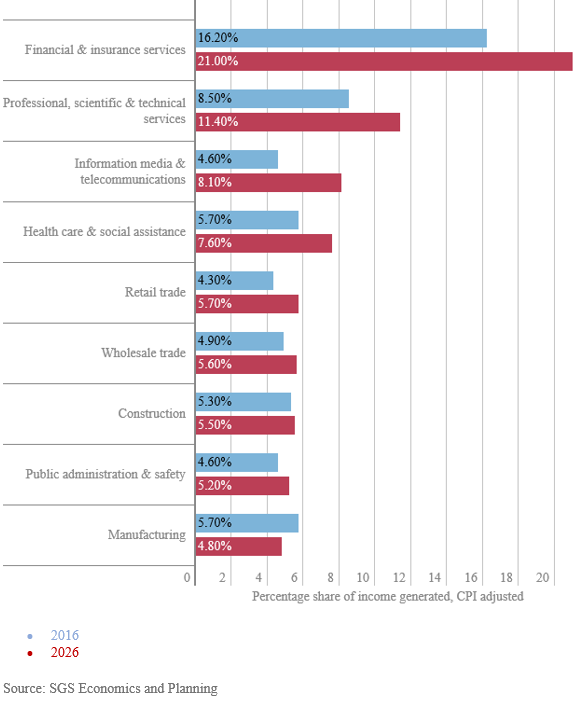 In many cities across the world, high-value, knowledge-intensive firms are clustering around well-located economic hubs. This trend has also been at work in Sydney and is expected to intensify in the decade ahead. These employment-rich “knowledge hubs” include Sydney’s CBD (financial services and professional services), Ultimo/Pyrmont (creative digital technology), Macquarie Park (medical technology) and Parramatta (specialised health and education precincts).

The Greater Sydney Commission recently flagged plans for the development of a new “Western City,” oriented around the proposed airport at Badgerys Creek that will be a hub for trade, logistics and science.

Committee for Sydney chief executive Tim Williams says the continued growth of Parramatta as Sydney’s second CBD will be crucial given the size of western Sydney’s population. 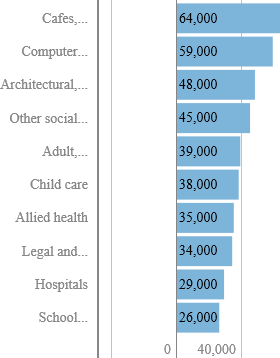 SOURCE: Jobs for NSW Jobs for the Future report, Aug 2016

He argues a high-speed rail connection between Parramatta and the CBD is overdue.

“A 10-minute train journey to Parramatta will be the game-changer for western Sydney,” Williams says. “It is a must to bind the city together.”

The healthcare sector has emerged as a major employer. Partly this is the result of the ageing of the population, which is also likely to stoke demand for leisure and aged-care services. According to demographic projections, the state’s fastest-growing age group will be the over-65s as the Baby Boomer generation, and those who migrated during the post-war years, move into retirement.

As a consequence, the contribution of health care to the Sydney economy has grown from around 4 per cent to nearly 6 per cent since 1995. And health care’s economic share is expected to grow to nearly 8 per cent by 2026. Around Westmead, where health services already provide about 18,000 jobs, a push by local industry and professional leaders to establish the area as Sydney’s Silicon Valley of health services promises up to 50,000 jobs by 2036.

All this is a far cry from when manufacturing ruled the roost in Sydney. In 1995, manufacturing was easily the city’s biggest industry, accounted for 14 per cent of output. But SGS Economics and Planning predicts manufacturing’s contribution will slip below 5 per cent during the next decade.

The rising share of knowledge jobs should help boost wages in Sydney the average wage for knowledge-intensive jobs is 22 per cent higher than the NSW average, and the growth in knowledge jobs in NSW over the past two decades has added about $2600 in real terms to our average annual wage. 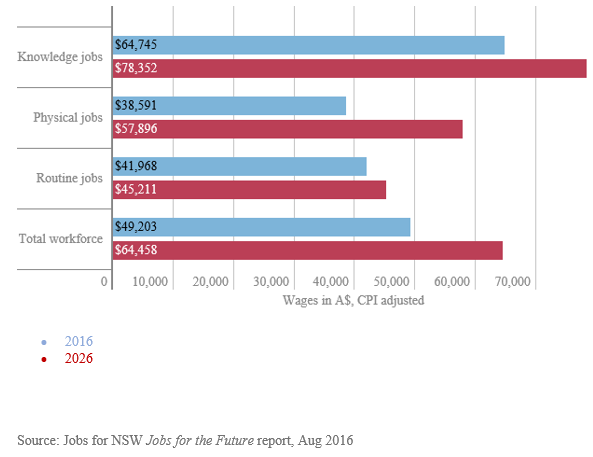 Sydney’s changing age and economic composition will also have ramifications for the cultural and ethnic makeup of the city. According to Terry Rawnsley, the departure from the jobs market of the Baby Boomers’ will help underpin robust overseas migration. “The growth of the labour force is slowing because more people are exiting the labour force than are coming in so you have to fill that gap with immigration,” he says.

The last Census showed more than one-third of the city’s residents were born overseas, compared with less than a quarter nationwide. A language other than English is spoken in one-in-three Sydney households, compared with fewer than one-in-four nationwide. These trends are likely to consolidate. Overseas migrants will provide about half the city’s population growth in the decade ahead and more than offset the net losses of people moving interstate and to other parts of NSW. 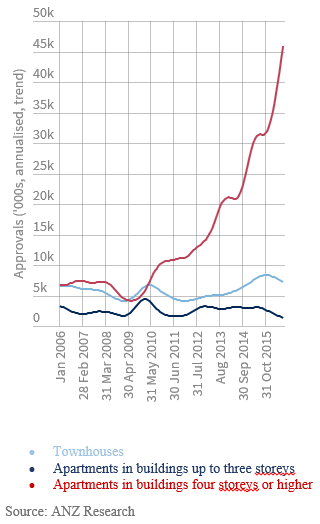 What remains to be seen, however, is whether the city’s changing demographics will be accommodated by its housing stock. Part of the required response will be an increase in apartments. Almost 40 per cent of Sydneysiders now live in medium- or high-density housing far higher than the Australian average of 24 per cent and that share is set to nudge higher in the coming decade.

The ageing of the population will contribute to increases in couple-only and lone person households the NSW Department of Planning has forecast the average household size in Sydney to shrink from 2.69 people in 2011 to around 2.62 by 2031. But Tim Williams warns the high cost of housing will remain a key challenge for the city.

One strategy to address this is likely to require developers of major projects to ensure up to 10 per cent of new properties can be rented for below market rates. But this policy has not yet been locked in, and its impact could be slow.

“In 10 years time I don’t expect Sydney’s housing to be any more affordable than it is now,”says Williams, who has been advocating for more affordable housing. “In fact, on current trends, it will get worse.”

If that prediction is correct, the proportion of renters in Sydney will continue to rise and some will be forced to abandon the city altogether. “There is some evidence that people are leaving Sydney, perhaps in their 30s when they have their first child, because they can go to a more affordable city,” says Williams.

Expensive property also means young people are staying at home longer and starting families later. There’s a risk the high cost of housing will gradually distort the city’s demography. “The question is will we still be a city for young people?” asks Williams.